There is a little bit of London at Mumbai’s Kamala Mills and it goes by the name of London Taxi. This gastropub is the first and only standalone property in Kamala Mills and its design approach is to make people feel as if they have entered the iconic black taxi that travels through the streets of London. The design interpretation for the space comes from Ashish Kambli, the principal architect of his firm The Architect’s Office, and designers Piyush Gupta and Prasad Patil of Drink Water. 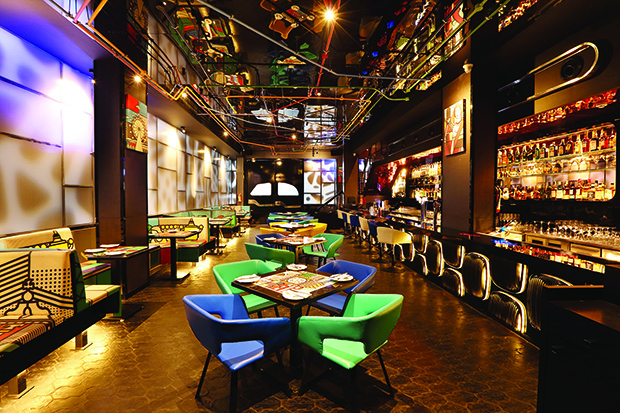 “We are a very concept driven design/architecture firm and for us London Taxi, the name itself was the starting point. We decided to design a customer experience where the act of entering the pub becomes the act of getting into a cab. This thought was the heart of all our design. That’s why the door is inspired from Austin’s iconic car door. The seating booths are dedicated to different locations of London. The bar front like the London Taxi carries iconic grills. The ground level ceiling recreates the underground tube station design. The first floor had the Sherlock Holmes first chapter created with graphic illustration without using a single word. The terrace was designed in white — inspired from the three white London Taxis that were designed by Chrysler but were never used,” informs Piyush.

The most challenging part of the project apparently was not the interiors, but the facade, according to Piyush. “The brief was quite daunting as London Taxi is the only standalone building in Kamla Mills and we were to design something iconic, anything less would have been a failure. We tried over 50 options internally and presented only one to the client. It was the abstract version of the London map. River Thames became the inspiration for the fluidic design. Earlier the plan was to laser cut and make the facade in three layers, but Ashish believed polycarbonate is the material of the future that will give facade a great look. So we went with that,” he says.

From flooring to every piece hanging on the wall, to every nook and corner — the creators have not only exhibited the creative geniuses in the decor but have also ensured that their vision resides in every aspect of the restaurant. The place boasts of the most unique and original decor that the city has seen, right from the exterior to the interior, there’s a little bit of London everywhere. The food is impressive too… one can choose from European, Continental and British flavours from their menu. Definitely, this taxi is worth the ride!