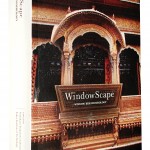 ‘The timeless essence of windows lies in its ability to be practical and, at the same time, bring a poetic sense of imagination to us’, writes editor Yoshiharu Tsukamoto, an academician and founder of BOW WOW Architects. This book is a fascinating documentation of windows of various regions (read countries) of the world. It also takes us across a variety of climatic zones, especially the south coastline of Eurasia that Yoshiharu terms as “window coastline”, while explaining how the influences along these routes have lead to an evolution of the fenestrations here. The survey was conducted by students of Toshiharu Ryokan, Japan, and compiled by Toshiharu Tsukamoto Laboratory and the Tokyo Institute of Technology.

‘A diverse range of behavioral elements can be found concentrated around windows which is one of the most industrialized products among architectural components,’ writes Yoshiharu. The manipulation of light and wind are highlighted in the case studies, which are also intricately linked to human experiences. The azure blue windows of Tunisia capture the Mediterranean light, while the bricolage of Villa d’Este, Italy, allows breeze but filters light. And then there are lyrical descriptions of the categorizations as well, for example: ‘The distinct boundary between light and shadow is lost resulting in the dissolved state of light’, Yoshiharu explains about Dissolving Windows, which create filigreed shadows by filtering light. The Sculpting Windows, on the other hand, bring strong light from the outside to inside such as in historic buildings like the Taj Mahal and Alhambra in Spain. Modernist examples would be a chapel at Ronchamp, France, and an oblong window in Fallingwaters, USA, which doubles up as a threshold between the indoor and outdoor and a space to relax.

The attempt to classify the windows seems, at best, poetic and relative rather than rational. Yet the refreshing quality of this book comes through. Otherwise prosaic measure drawings come alive as sketches, notes and photographs that can be revisited. It’s nice to note that the intricate fenestration of the Patwon Ki Haveli in Rajasthan forms the cover, while the chapters are interspersed with essays on Christopher Alexander, Geoffrey Bawa and Bernard Rudofsky.