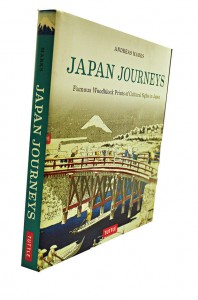 Armchair travel to the land of the rising sun this monsoon with Japan Journeys.

Photography has become an essential part of travel in the 21st century. However, this new book will take us back to a time where creatively crafted woodprints were used as a commercially viable method to capture and document travel. Author Andreas Marks is the head of the Japanese and Korean art Department, and the Clark Center at Minneapolis Institute of Art (which houses a significant collection of these prints). He presents over 500 fascinating Japanese woodblock prints from the 18th to 20thcentury in this book. “The origin of the travel boom in Japan is found in the pilgrimages to sacred sites that became widespread among all classes during the nineteenth century,” writes Marks in the introductory chapter. There’s a clear focus on the delight of travel, discovery and the impact of other cultures on Japan.

Presented as a narrative of travelling through ancient Japan, the tome features classical prints that bring alive a part of the country and traditions that have since vanished. The contemporary prints included reference a more current milieu, but the reader can traverse between different moments in time and can read the new through the layers that reference the old. The prints effectively capture the ephemeral qualities of the seasons, and the vibrancy and grandeur of festivals. Exceptional prints such as Utagawa’s Fireworks at Ryogoku captures the beauty of a momentarily lit night sky, and the depth of a dark vast river filled with boats. Then there’s the breeze that is encapsulated in the movement of the freshly dyed cloth hung out to dry in Utagawa Hiroshige Dyer’s Quarters, Kanda 1857; or the blue of the summer skies and blanket of flowers in Kawase Hasui’s print Iris Garden at Meiji Shrine from 1951.

The prints portray a series of interesting dichotomies that makes Japan remarkable. The new versus the old, tradition versus progress; cultural customs such as Sumo tournaments and tea ceremonies come alive on the book’s pages. Leisure seekers jostle with the busy city dwellers, hedonism contrasts with spirituality. This volume documents several famous tourist locations, many of those that may have since disappeared. For instance, the lush lily pond of the Zozoji temple at Benten Shrine from Kawase Hasui’s 1929 print. The remarkable transformation of Tokyo from the fishing town of Edo to one of the most urbanized cities of the world can be observed in the series of prints that document various districts of the city. Developing infrastructure, new modes of transport and trolleys feature predominantly in the prints. Most notable and prolific amongst the artists featured are Utagawa Hiroshige and Katsushika Hokusai, famed for their landscape-oriented work. This book proves to be a pleasurable visual journey through time, art and culture.